The Simplified Guide: Paul's Letters to the Churches by David Hazelton

It is time for a FIRST Wild Card Tour book review! If you wish to join the FIRST blog alliance, just click the button. We are a group of reviewers who tour Christian books. A Wild Card post includes a brief bio of the author and a full chapter from each book toured. The reason it is called a FIRST Wild Card Tour is that you never know if the book will be fiction, non~fiction, for young, or for old...or for somewhere in between! Enjoy your free peek into the book!


You never know when I might play a wild card on you!

The Simplified Guide: Paul's Letters to the Churches

Deep River Books (September 5, 2013)
***Special thanks to Emily Woodworth for sending me a review copy.***

Like Paul, David Hazelton's professional background is in the law and business. He is a senior partner in a law firm in Washington, D.C., one of the nation's five largest firms. Dave's passion is teaching Sunday School and leading Bible studies in his home, church, and workplace. He serves as an elder at Cornerstone Evangelical Free Church. 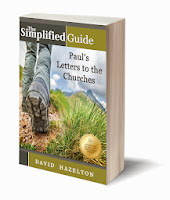 Paul wrote to "all those everywhere who call on the name of our Lord Jesus Christ" (I Cor. 1:2). Far from works of abstract theology, his letters provide practical instruction to people without any special theological training or educational credentials––regular people like you and me. In The Simplified Guide, David Hazelton collects Paul’s instructions on specific issues as faithfully and completely as possible. Rather than promoting a particular interpretation, Hazelton guides readers to make their own observations about applying Paul's instructions to their lives.

We humans are afraid of countless things. We fear spiders,
clowns, heights, public spaces, public speaking, and a thousand other terrors.
From the silly to the serious, fear is an unavoidable part of what it means to
be human.
Yet there is one fear that rises like a
specter above all others, that sounds a sinister echo in the background of our
daily lives: the fear of death. Nothing is so terrifying as the realization
that we will, sooner or later, die and confront the uncertainty about what will
happen to us on the other side of this life. The inevitability of death makes
it no easier to accept; its permanence forces us to come to grips with
fundamental issues.
It is in this profoundly human context
that Christ died as a man, just as every man, woman and child will eventually
die. Yet Christ conquered death through his resurrection. As sons and daughters
of God, we share in Christ’s victory over death and his promise of eternal
life.
Paul’s most extensive discussion of the significance of Christ’s
resurrection is in 1 Corinthians 15:12–57. In that passage, he begins by
correcting those who deny the resurrection, explaining that “if Christ has not
been raised, our preaching is useless and so is your faith” (v. 14) and “if
Christ has not been raised, your faith is futile; you are still in your sins”
(v. 17). He then declares in verses 20–22:
But Christ has indeed been raised from
the dead, the firstfruits of those who have fallen asleep. For since death came
through a man, the resurrection of the dead comes also through a man. For as in
Adam all die, so in Christ all will be made alive.
On the day of
our resurrection to eternal life, our decaying material bodies will be
exchanged for glorified and imperishable bodies. Christ “will transform our
lowly bodies so that they will be like his glorious body” (Phil. 3:21). Much as
a seed is planted or sown in one form but then emerges from the earth as
something new and better, Paul explains:
So will it be with the resurrection of
the dead. The body that is sown is perishable, it is raised imperishable; it is
sown in dishonor, it is raised in glory; it is sown in weakness, it is raised
in power; it is sown a natural body, it is raised a spiritual body. If there is
a natural body, there is also a spiritual body. (1 Cor. 15:42–44)
He compares our current mortal bodies to
“jars of clay” (2 Cor. 4:7) and an “earthly tent” which we will exchange for
“an eternal house in heaven” (2 Cor. 5:1). The glory of what God has in store
for us is beyond our comprehension. “‘What no eye has seen, what no ear has
heard, and what no human mind has conceived’—the things God has prepared for
those who love him” (1 Cor. 2:9).
This
resurrection power not only has eternal significance, it also has the power to
transform our lives today. Emphasizing the connection between the resurrection
and the power to live a holy life today, Paul explains in Romans 6:4–10 that:
We were therefore buried with him
through baptism into death in order that, just as Christ was raised from the
dead through the glory of the Father, we too may live a new life. For if we
have been united with him in a death like his, we will certainly also be united
with him in a resurrection like his. For we know that our old self was crucified
with him so that the body ruled by sin might be done away with, that we should
no longer be slaves to sin—because anyone who has died has been set free from
sin. Now if we died with Christ, we believe that we will also live with him.
For we know that since Christ was raised from the dead, he cannot die again;
death no longer has mastery over him. The death he died, he died to sin once
for all; but the life he lives, he lives to God.
Again, Paul explains in Romans 8:11
that: “If the Spirit of him who raised Jesus from the dead is living in you, he
who raised Christ from the dead will also give life to your mortal bodies
because of his Spirit who lives in you.”
Jesus Christ took our sins upon himself
when he was crucified on the cross, but it was his glorious resurrection that
conquered death and prepared the way for our resurrection and eternal life. The
great human fear of death is conquered in the triumphant resurrection of
Christ. His victory over death changed everything.
WHO IS JESUS CHRIST THAT HIS DEATH AND RESURRECTION
COULD HAVE THIS SIGNIFICANCE?

How does this gospel—the unbelievable, life­transforming,
history­shaping good news declared by Paul—affect our lives today? As we close
this first chapter, we pause to reflect on the practical implications of Paul’s
instructions. This opportunity for reflection is not intended to prescribe
specifically what we need to do or how we need to change in light of the truths
declared by Paul. Instead, these few questions can encourage us to come before
God and seek his guidance on how to respond to the truths taught by Paul.
1. Why should God let us into heaven?
2. What would be our eternal destiny if God gave us what we
deserved rather than the forgiveness we can have through Christ?
3. Can we be saved by following rules and performing rituals?
Why not?
4. What is the significance of the fact that salvation is a gift
to be received in faith rather than something to be earned through good works?
What is the significance of this fact to our daily walk as Christians?
5. What is the significance of the fact that the gospel is
centered on Christ and what he did, rather than on us and our efforts? How
should this reality affect our daily walk as Christians?
6. What does it mean to accept the gospel in faith? At an intellectual
level, how do we accept the gospel? How does receiving the gospel in faith go
beyond intellectual acceptance?
7. Can we fully understand the mystery and miracle of the
gospel? Why not?
8. If we cannot be saved by our own good works, what is the role
of good works in a Christian’s life (which will be discussed at length in Part
II of our study)?
9. What is your relationship with Christ? Is he both your Lord
and Savior?

10. How should we live differently in light of the gospel?
Posted by Nothing But Books at 3:10 AM

Arise From The Ashes

An Anthology of Hope

For I know the thoughts that I think toward you, saith the Lord, thoughts of peace, and not of evil, to give you an expected end.